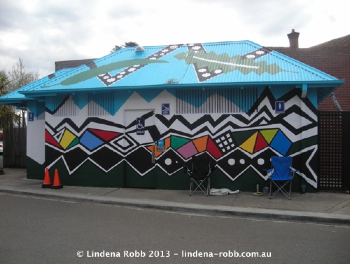 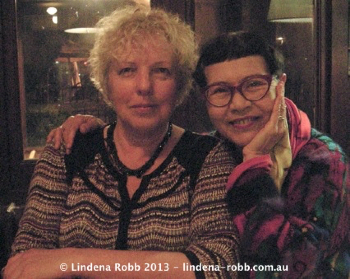 for Blue Mountains Council in Blackheath

The Blackheath toilet block is situated in the car park off Govetts Leap Road, opposite the huge Jenny Kee mural on the side of the Victory Theatre Building.

Lindena began the project in late September and completed it in time for the Rhododendron Festival in November.

"I had painted murals in Sydney and Queensland for 12 years, but this was the first time I rendered another person's design on a mural. Luckily that designer was Jenny Kee.

Working in a public place with the car park directly behind me was challenging. Yet, the odours that accompanied the loo were the greatest challenge."

We had a number of volunteers who participated in painting the mural, which was great for all of us. Robin Martin was employed to paint the design on the corrugated roof, which was a very difficult task.

We completed the mural on time and celebrated with a delicious dinner and drinks in the Ivanhoe Hotel.