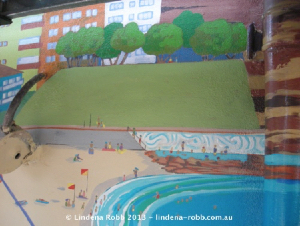 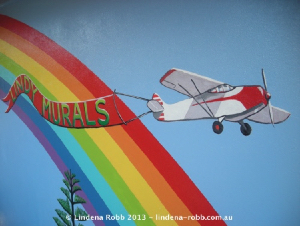 In 1983 Lindena Robb, a parent at the school, was invited to paint the newly rendered wall at the back of the school facing Gould Street.

As a practising artist, Lindena was delighted to have a huge blank wall to paint on.

After asking the school students to paint or draw ideas for the mural, Lindena combined most ideas into a stylised image of the school and surrounds.

Now, 30 years later, the principal Maria Hardy, contacted Lindena to ask if she would return to restore the mural, to celebrate the school's 90th anniversary.

After rendering and scaffolding were organised, Lindena began work on Friday 22nd of February and completed the work in April.

"It has been hard work climbing the ladder, and scaffolding, working in the hot sun in the afternoon. A 7am start helps start the day in the cool shade of morning."

"Having the opportunity to return to work I did 30 years ago and improve upon it is a real pleasure working amongst the children, receiving praise, criticism and questions is a delight. Many of the parents now were kids at the school when I originally painted the mural."

Because of the burden of carting buckets up and down, Lindena devised a way of painting with Dulux Weathershield without the use of water. She had a brush for each colour, and after use wrapped them tightly in small plastic sandwich bags. This way she did not pollute the drains or gardens with paint water and saved energy and mess too.

What people have said

It is a wonderful to have this mural included as a piece of our school's history. We're very grateful for Lindena's artistry and hard work.